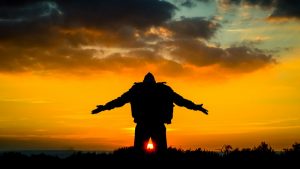 Both the Old and New Testaments give instructions on casting cares or “venting”:

Cast your cares on the LORD and he will sustain you; he will never let the righteous fall.

Cast all your anxiety on him because he cares for you.

Both verses instruct us to cast our cares or anxieties on God. We’re told to do this because the LORD cares about us and doesn’t want immaterial burdens to weigh us down or limit us, which will inevitably happen if we don’t vent in some manner.

What exactly does it mean to “cast all your anxiety on him”? It means to literally go to the LORD in prayer and hurl our burdens on him. This includes the offenses that have been unjustly committed against us and the sense of violation and anger they produce, which can tempt us to become bitter. Why cast our cares on to the LORD? Because we can’t handle them. Just as we must remove physical waste from our bodies so we must remove emotional waste. Venting is as vital to our spiritual-mental health as the large intestine is to our physical health – the waste must be removed. No wonder venting is strongly encouraged in the Bible, as seen in this verse:

Trust in Him at all times, you people; Pour out your heart before Him; God is a refuge for us.

It’s important that we learn to trust our heavenly Father “at all times,” how much more so in times of attack, conflict or crisis? When you come before your Creator in prayer, “pour out your heart before him” – discharge all cares, offenses, frustrations and negative emotions. God’s worthy of your trust and will be your safe “refuge” as you do this. Remember, venting is for your spiritual and mental well-being.

Here’s an actual example of David venting to the LORD:

I cry aloud to the LORD; I lift up my voice to the LORD for mercy. (2) I pour out my complaint before him; before him I tell my trouble. (3) When my spirit grows faint within me, it is you who know my way.

David regularly practiced this and referred to it as “pouring out his soul” (Psalm 42:4 & 62:8). Yet, notice whom he’s pouring out his soul to – God. He’s not just venting to a wall; he’s not merely airing his problems to a psychologist or psychiatrist, who are costly and too often idolize meds; he’s not discharging to a friend, which – although a legitimate way to vent – too frequently devolves into grumbling or gossip. No, he’s pouring out his troubles and complaints to God Almighty, the Creator of heaven and earth! If we do this, Psalm 55:22 above promises that the LORD will “sustain” us, which means he will support us and bear the weight from below; in other words, carry us through. No psychoanalyst, friend or drug can fully accomplish this; only the LORD can! (I can’t help but think of the popular poem Footprints in the Sand).

There are two types of venting: moderate and extreme. The former should be practiced regularly in your commune time with God. Isn’t it awesome that you can honestly discuss the most intimate aspects of your life with a loving heavenly Father and discharge negative feelings, burdens or offenses? You might as well be totally candid and transparent since, as your Creator, he knows everything about you anyway, even your very thoughts (Psalm 139). He knows your past, your sufferings, your struggles, your victories, your weaknesses, your strengths and your potential. He knows all about your psycho-biochemical makeup and therefore how you’re “wired.” Isn’t it comforting that you can go to someone who knows everything about you and dearly loves you? Someone who doesn’t focus on your flaws and forgives your failures, as long as you humbly confess (1 John 1:8-9)? Someone who is for you and not against you (Romans 8:31)? Someone who believes in you? Someone who literally delights over you with singing (Zephaniah 3:17)?!

Extreme venting, on the other hand, occurs much less often and is characterized by radical discharging where one’s emotions will fluctuate and sometimes even contradict. A good example from the Bible is Jeremiah 20:7-18 where the prophet started off his venting by accusing God of deceiving him, not in the sense of lying, of course, but rather of roping him into doing something he didn’t want to do, which was to confront the Judeans for their stubborn transgressions and prophesy doom for the nation if they refused to repent. Needless to say, this didn’t win the prophet many friends. After accusing the LORD in this manner Jeremiah vented about the ridicule and hostility he regularly faced. Amazingly, he next switched to boasting of the LORD, expressing his bold faith, celebration and praise. The prophet then shifted back to the negative, cursing the day of his birth and literally wishing his father had aborted him! Read the text yourself if you don’t believe me.

Why is this passage in the Bible? Why didn’t the Almighty strike Jeremiah dead for accusing him of deception? Wasn’t Jeremiah a righteous man of God and a mighty prophet? Yes, but the LORD wants us to know that intense emotional discharging like this is sometimes necessary, no matter how spiritual we may be or mightily used of the LORD. Not only is it perfectly normal, it’s healthy! God didn’t respond with wrath because he knew Jeremiah’s heart and knew what he was doing – casting his emotive burdens on to the Ultimate Psychologist, who knew him inside and out better than any human being ever could. There’s a world of difference between genuine emotional unloading like this and a grumbling, complaining spirit that stems from a faithless, rebellious heart. It’s between you and your Maker to distinguish the two.

Another good example of extreme venting is Job. The first two chapters of the book of Job show him suffering great tragedies – the deaths of his ten children and all but four of his many employees, the loss of all his great wealth and his entire body blighted by painful boils. Much of the rest of the book consists of Job, in deep anguish, debating the causes of the tragedies with a few of his friends. Despite others being present, a lot of what Job said was directed at God Himself. He expressed some things that are rather shocking and irreverent for a blameless, upright man who feared the LORD and shunned evil, which is how God described him in Job 1:8. Examples of Job’s “shocking and irreverent” words include 10:1-3, 13:3,13 and 15:12-13. What was Job doing? He was venting, casting his cares on the LORD. He was in utter misery after the tragedies and therefore discharged his great anger, frustrations and grief. He couldn’t handle these emotional burdens but his Creator could, and the LORD faithfully sustained him.

Job may have been angry and frustrated at God and at the baffling injustices of life in general, but he never turned his back on the LORD and acted like he didn’t exist. In other words, he still had faith and hope, which explains this statement Job made to his “friends”:

“Keep silent and let me speak [to the LORD]; then let come to me what may. (14) Why do I put myself in jeopardy and take my life in my hands? (15) Though he slay me, yet will I hope in him; I will surely defend my ways to his face”

Job’s friends were aghast at his seemingly irreverent words; in fact, they thought he was guilty of some great secret transgression that caused his terrible calamities. Although they understood he was venting to God (Job 15:13), they wrongly judged it as an unrepentant rebel raging against the Almighty with impotent fury rather than what it really was – a righteous man venting his grief and sense of unjust violation to his Creator. Job essentially told them to shut up and let him speak; he was going to “have it out” with his Maker, come what may. Yet, even while he was intent on honestly venting and defending his ways to God’s face he also expressed his hope in him. In short, he still believed in the LORD despite his entire life falling apart around him. He still hoped and believed that the Most High was greater than his disastrous circumstances and that he would somehow restore him, which is precisely what happened as revealed in chapter 42.

God honors extreme venting like this because the person in question is not turning away from Him and acting like he doesn’t exist, but rather turning to Him and honestly addressing his/her problems. The LORD is the perfect person to go to at such times because he is more than able to handle whatever we throw at Him.

A good example of extreme venting from modern cinema is Lt. Dan in Forrest Gump when he “has it out” with God on the shrimp boat in the storm. This resulted in the Lieutenant’s peace and happiness because, again, venting is for one’s own spiritual and mental wellness.*

* Gary Sinise, who played Lt. Dan, is a Catholic Christian and true hero. Since the 9/11 attacks on America he has volunteered to help the USO and has encouraged troops in the most dangerous locations overseas. He’s a longtime advocate for veterans and their families and co-founded a program in 2004 that reaches out to children in war-stricken countries, such as Iraq. Affectionately called “Lt. Dan” by military folks, Gary received the Presidential Citizens Medal in 2008, the second highest honor for a civilian.

Extreme venting like this isn’t pretty. It’s raw, honest and primal. It’s tackling the awful truth with one’s Creator, whatever that truth might be. There have been a few occasions where I was “having it out” with God and my wife literally fled the scene – she was understandably concerned that a lightning bolt might hit me at any moment! My attitude was similar to Job’s: “Let me speak; then let come to me what may.” Thankfully, this type of extreme venting doesn’t happen so much anymore since “I have stilled and quieted my soul like a weaned child with its mother” (Psalm 131:2), but it’s still sometimes necessary. It’s part of having a real relationship with the LORD. Of course, some Christians say they’re genuinely tight with God and never resort to extreme venting, and that’s great. More power to ’em!

Needless to say, when you face the inevitable calamities and problems of life – including inward struggles – don’t become an atheist and pretend like your Creator doesn’t exist! Go to him like David, Jeremiah, Job, Lt. Dan & myself and throw off your anger, your frustrations and your grief. Don’t allow offenses to embitter you. You can’t handle these emotional burdens but the Most High can. Never stop believing and hoping! Your heavenly Father will faithfully restore you and heal your heart and body, just as he did for Job. He’s the same yesterday, today and forever. Amen. 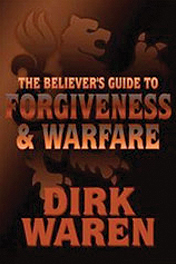 Note: This article was edited from The Believer’s Guide to Forgiveness & Warfare. To pick up a copy go here (both print and eBook versions are available).

For a limited time we’re offering this book FREE! Just send us your address here and we’ll send out your gift copy (those outside the USA must pay approximate shipping).