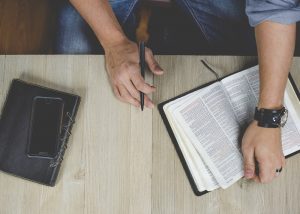 Catholics often cite Mathew 16:19 to support their belief in the earthly supremacy of the Pope as the leader of the Church, as well as the idea of papal succession. Is this accurate? What do the God-breathed Scriptures say?

What Did Jesus mean by “On this Rock I will Build My Church”?

The Messiah made this well-known statement after asking his disciples if they knew who he truly was. Simon Peter answered, “You are the Christ, the Son of the living God” (verse 16).

Jesus replied, “Blessed are you, Simon son of Jonah, for this was not revealed to you by man, but by my Father in heaven. (18) And I tell you that you are Peter, and on this rock I will build my church, and the gates of Hades will not overcome it.

This is honestly flimsy evidence to support something as important as the earthly supremacy of a bishop (Pope) in Rome over Christ’s worldwide Church, not to mention the Catholic doctrine of papal succession.

Let’s first define the word “Church”: In the Greek this word is ekklesia (ee-KLEE-see-ah), meaning “called out of ” or “the called-out ones.” It refers to people who have been called out of the darkness of this world and consecrated to the LORD via responding in faith & repentance to the good news of the message of Christ (Acts 20:21) and the ensuing spiritual rebirth (1 Peter 1:3,23 & James 1:18). The worldwide Church is synonymous with “the body of Christ” (Colossians 1:18) and is also called “God’s household” or “the household of God” in Scripture (1 Timothy 3:15). The Church  includes every genuine believer who’s experienced spiritual regeneration regardless of what sectarian tag they favor (John 3:3,6 & Titus 3:5).*

* Always remember this about sectarian tags: Putting a label of ‘corn’ on a can of beans doesn’t make the can of beans a can of corn.

So what is the “rock” on which Christ said he would build his church? It’s not Peter whose name in Greek, petros, means “stone.” The “rock” on which Jesus will build his church is petra in the Greek, meaning “large rock” or “bedrock.” When you’re driving down an interstate highway and pass through a section with sheer rock cliffs on either side it’s obvious that the road-workers literally blasted through a big hill or mountain. When I see this I often marvel at the solid mass of rock underlying the topsoil. This is petra or bedrock. Christ figuratively said his church would be built on such bedrock—an incredible mass of solid rock. What is this “rock”? It’s the revelation of the fact that Jesus is the Christ or Messiah, which literally means “anointed one.” It’s a revelation because Jesus said it was “revealed” to Peter by Father God.

What’s the big deal about having a revelation that Jesus is the Christ? Please understand that “Christ” is not the last name of Jesus. “Christ” is translated from the Greek word Christos (khris-TOS), which means “anointed one” and comes from the Hebrew mashach (maw-SHAKH) meaning “anointed” or “chosen one.” A good example of this Hebrew word used in reference to Jesus in the Scriptures is Psalm 45:7.

“Jesus” was simply the name the angel Gabriel gave to Mary, as shown in Luke 1:31. This name was specifically given because ‘Jesus’ is the transliteration of a Hebrew term meaning “Yahweh [God] saves” (or “Yahweh is salvation”). So ‘Jesus’ is the Lord’s God-given proper name while ‘Christ’ is his title, signifying that Jesus was sent from God as humanity’s King and Deliverer. With this understanding, ‘Jesus Christ’ means “Jesus the Anointed One” and could be translated as “God saves through His Anointed One.”

While the meaning of mashach—“anointed”—literally refers to the pouring of oil, it can also refer to one’s separation unto God, even if literal oil is not actually used (Hebrews 1:9). You see, when someone was promoted to a position of authority in the Old Testament, oil was smeared on the person’s head to signify being consecrated (separated) for God’s work. See 1 Samuel 10:1 for a good example. Anointing was a ritualistic act indicating God’s choosing (e.g., 1 Samuel 24:6).  Kings, priests, and prophets were all set apart for the LORD’s ministry in this manner.

I explained all that so you’ll fully grasp what Peter was saying when he answered Jesus’ question. When Peter replied “You are the Christ, the Son of the Living God” he was acknowledging that Jesus was the anointed prophet that God would raise up as the savior of the world. This was prophesied repeatedly in the Hebraic Scriptures (e.g. Genesis 3:15, Deuteronomy 18:18, Isaiah 7:14 & 9:6). In short, Peter had a revelation that Jesus was humanity’s Savior. And this revelation is the “bedrock” upon which Christ would build his church, his “called-out ones.” This makes perfect sense when you understand that it’s this very revelation—this belief inspired by God—that prompts people to embrace the gospel and enables them to be reconciled to the Creator through spiritual regeneration and, hence, obtain eternal life (John 3:3,6,16,36). You can only be a “called-out one” — a member of Christ’s church —  if you have this revelation, like Peter. As such, it’s the bedrock upon which Christ builds his church. Anyone who doesn’t have this revelation can’t be a “called-out one” and therefore the Lord cannot use that person to build his church. Are you with me? This explains this passage:

Since you have to believe that Jesus is the Anointed Savior in order to be “born of God,” this revelation is the rock upon which Christ builds his church, his called-out ones.

Christ adds in verse 18 that the “gates of Hades” would not overcome his church. The “gates of Hades” was a colloquial Jewish phrase for death, which makes sense since Hades (or Sheol in Hebrew) is the realm of the DEAD and consequently a person would have to die to go there. Jesus was saying that even death, Satan’s ultimate weapon (Hebrews 2:14-15), could not stop the Messiah from birthing and unleashing his church. And it didn’t. He was raised to life and the rest is history. Furthermore, death has no power to destroy the church, period. Every Satanic attempt to wipe out believers and stop the church’s spread has failed; in fact, the blood of martyrs has always served to advance God’s kingdom rather than diminish it (e.g. Acts 7:59-8:4). In addition, when a spiritually-regenerated believer physically dies their soul doesn’t go to Hades/Sheol, the realm of the DEAD, but rather goes to be with the Lord in heaven to await his or her bodily resurrection (Philippians 1:20-24, 2 Corinthians 5:1-10, 1 Thessalonians 5:10, Revelation 6:9-11 & 7:9-17).

The Pope May Be the Leader of the Catholic Sect, but He’s not the Supreme Earthly Leader of Christ’s Church

The God-breathed Scriptures simply do not support the idea of a supreme & infallible human leader of Christianity on earth nor the doctrine of papal (apostolic) succession, the idea that the (supposed) supreme earthly authority of the papacy is transferred from pope to pope. The best biblical support Catholics can come up with is Matthew 16:19, which they milk for details that the rest of the New Testament refutes.

No where in the Bible are believers encouraged to follow some supreme & infallible bishop (aka Pope) in Rome. Other than Matthew 16:19, the best support Catholics can concoct is 1 Peter 5:13, which is pretty feeble evidence, to be honest. Whether Peter became the bishop of Rome or not, there’s zero biblical evidence that this position was to have primacy over the worldwide Church. In other words, the doctrine of the earthly supremacy of the papacy is unscriptural, which is a huge problem when you consider that the God-breathed Scriptures are the LORD’s blueprint for authentic Christianity. In other words, the Bible is the basis for all Christian doctrine & practice and any corrections thereof (2 Timothy 3:16-17 & 1 Corinthians 4:6).

A good example of why this is so important can be observed in pope Francis recently suggesting that homosexuality is no longer a sin (you can read about it here), which of course contradicts what the God-breathed Scriptures clearly say on the topic (it also contradicts the official doctrine of the Catholic sect). This is Exhibit A on why it’s not a good idea to consider a fallible human being from a dubious sect to be the unquestionable earthly leader of the worldwide Church and (supposedly) infallible in regards to doctrine. Francis was certainly wrong here.

Roman Catholicism – Is it the “Original Church”? (No)

Who Wrote the New Testament Books? Who Authorized them as Scripture Canon?

Church of Christ — What Is It?

Sectarianism — What is It? What’s Wrong with It?

Religion and Christianity — What’s the Difference?

Godliness and Religion—What’s the Difference?

Legalism — Understanding its Many Forms