Military Service — Is it Okay for Believers to Serve in the Armed Forces? 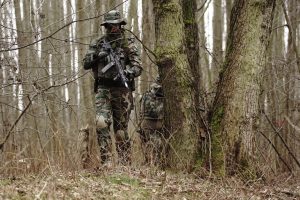 Some hardcore pacifists are so unbalanced they argue that a true Christian should never participate in the military, even in cases where the God-ordained authorities require it. Just yesterday I ran into a couple of believers who adamantly advocated this position. The implication, of course, is that it’s inherently sinful to serve in the military and be willing to kill or die in obedience to the civil authorities of one’s country. War is indeed hell and should ideally be resorted to only when absolutely necessary. Yet those who believe serving in the armed forces is itself  evil have to explain John the Baptist’s answer to some soldiers who asked him what they should do. Notice John’s response:

Keep in mind that John was preparing the way for the ministry of Jesus Christ by calling people to repentance (Mark 1:4). If merely being a soldier is intrinsically evil John would have said something like, “It’s wicked and sinful to be a soldier; flee from the military or you will suffer God’s wrath!” You’ll find no such statement anywhere in the New Testament, whether from Jesus, Paul or anyone else. Simply put, governing authorities need police and military personnel to fulfill their God-ordained mandate to maintain societal order, which includes protecting the country (Romans 13:1-6).

This is not to say, of course, that individual Christians don’t have the right to object to military service due to personal conscience or what have you. In such cases the military is better off without them since their hearts wouldn’t be in it, so to speak (see Deuteronomy 20:8 & Judges 7:3).

Nor am I saying that corrupt governments shouldn’t be resisted or corrected, like the Nazi-led government in Germany during WWII or the Japanese “constitutional monarchy” of the same era (which was, in effect, a military junta). A good biblical example of resisting corrupt government can be observed when Nathan made a bold stand against the gross corruption in David’s monarchy (2 Samuel 12:1-10).