Bible — You Own One at a Huge Price! 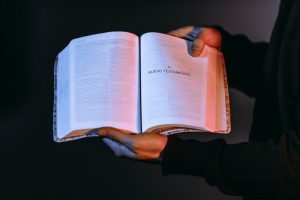 Today, the Bible, the world’s most translated book, is accessible to virtually everyone, and its study is usually encouraged in Christian circles. Yet, in medieval times (circa 476-1500) the Bible was not available to the common person in Western Europe. The Old Testament was generally only available in Hebrew, Greek (the Septuagint) and Latin (the Vulgate). The New Testament was only available in Greek and Latin. Consequently, only scholars and educated clergy had direct personal access to God’s Word.

In time, Roman Church leaders adapted the absurd view that it was dangerous for ordinary people to read the Scriptures without benefit of clergy. They insisted that it was safer for people to rely on priests to tell them what the Bible said and meant.

These religious “leaders” well knew that it is knowledge and truth which give people power and freedom (Proverbs 24:5 & John 8:31-32), yet, in keeping with the character of lifeless religiosity, they wanted the common people to have neither (Luke 11:52). As such, those who dared to translate the Bible found themselves engaged in an increasingly dangerous business as the ban on vernacular Scriptures carried with it the death penalty in some countries.

John Wycliffe was one of the first to make the Bible available to the average person. He argued that the Scriptures did little good locked away in Latin that few could understand. In 1382 he finished the first complete English translation based upon the Latin Vulgate. Hand-written copies were widely circulated and eagerly read.

In 1408, nearly a quarter century after Wycliffe’s death, church leaders formally outlawed the reading of Wycliffe’s translation. So England had an English Bible but it was a forbidden one.

It gets worse: In 1415 the Council of Constance condemned Wycliffe, ordering his body exhumed and burned, along with his books. Fortunately, even the most energetic opposition could not wipe out this new powerful movement to translate the Bible into the languages of the common people.

In 1522 William Tyndale conceived the project of translating the New Testament directly from the Greek, bypassing the Latin Vulgate. To a critic of this plan he boldly declared: “If God spare my life, ere many years pass, I will cause a boy that driveth the plough shall know more of the Scriptures than thou dost.”

To carry out his noble project, Tyndale had to flee to Germany because of strong opposition from religious authorities in England. He was never to return to his home country.

After Tyndale finished his translation, copies were smuggled into England and widely distributed. But, when discovered, church leaders ordered the Bibles gathered up for burning!

In 1535 Tyndale was betrayed, kidnapped and imprisoned by papal agents near Brussels. He was tried for heresy and condemned to death. A decade earlier they had burned the translation; now they resolved to burn the translator!

Tyndale went boldly to the stake, still defending his belief that the English should have a Bible in their own language. He was strangled at the post before they burned his body. With his last breath he cried out, “LORD open the king of England’s eyes!”

Following King Henry VIII’s break with the Roman Church he ordered that an English translation be made available to all. Consequently, in less than four years after Tyndale’s death four English translations were published in England, including the Great Bible, all based on Tyndale’s work.

In the ensuing years a flood of English translations and revisions swept the landscape as each translator sought to correct the errors and improve the language of the earlier ones.

In the early 1600s King James appointed 54 scholars to carry out the work of translating an accurate “Authorized Version” for the nation. This version was, of course, the popular 1611 King James Bible (i.e. the KJV). What distinguished this translation from all other versions was that it was produced by a committee of scholars, rather than by just one person.

The original 1611 version of the KJV is virtually unreadable to modern English-speaking people; it was revised in the 1760s, culminating with the Oxford Standard Text of 1769, and this is the version people read today when they read the KJV. As such, the KJV is written in the English from 250-400 years ago and is understandably hard to understand for modern English readers. Yes, the Holy Spirit can certainly help them understand the archaic text, but how much more so if they read a translation written in the language they actually speak and understand? This is why I utilize sound modern versions of the Bible in my teachings, like the New International Version (or NIV), because what’s important is not allegiance to an archaic version of the Bible, but rather reading and understanding God’s Word and applying it to your life. As Jesus said, “If you continue in my word, then you are truly my disciples; and you will know the truth, and the truth will make you free” (John 8:31-32).

This isn’t to say, of course, that you shouldn’t read the KJV or use it in your studies. I own 4-5 editions of the KJV and sometimes quote it in my teachings. It’s a historically important version of the Bible and has aesthetic value to boot, but it would be a mistake to limit yourself to this version. If you haven’t done so already, please check out some of the sound modern versions of the Bible, like the NIV, the New King James Version, the English Standard Version, the New Revised Standard Version and many others. NIV, by the way, stands for “Nearly Infallible Version.” (Lol, just joking).

I encourage you to switch versions now and then and reference other translations in your studies besides the main version you like to read. It’ll bless your understanding and walk with the LORD.

Realizing that God inspired many dedicated Christians to great personal sacrifices in order to make His Word accessible to all people should motivate us to greater appreciate the Bible.

This once-forbidden book now lies open – to YOU.

Take advantage of it!

Who Wrote the New Testament Books? Who Authorized them as Scripture Canon?

Bible—Is it Full of Contradictions? Does it Promote Slavery, Tyranny and Discrimination?

Berean Spirit — What is it? How Do You Cultivate It?

Sectarianism — What is It? What’s Wrong with It?