Should Ministers Be Addressed with Titles? 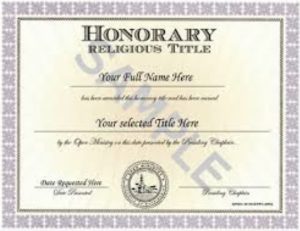 What does the Bible say about addressing ministers with titles, like “Pastor John,” “Apostle Harris” or “Reverend Jones”? Some ministers are so insistent about titles that they become noticeably upset or offended when someone doesn’t address them accordingly. You can be sure that disciples in this type of minister’s group won’t be promoted if they fail to voice the preferred title; they will in effect be shunned and sometimes even badmouthed for their perceived “transgression.”

While this is a minor issue, it’s not insignificant and Jesus himself elaborated on it. Notice what He taught in reference to Christian leadership.

“they [Pharisees and teachers of the law] love to be greeted with respect in the marketplaces and to be called ‘Rabbi’ by others.

The legalistic religious leaders of Israel relished being referred to with an honorary title like “Rabbi,” which means ‘teacher’ (John 1:38). Jesus said this isn’t the way it’s supposed to be in the church because we “are all brothers,” which indicates the equalitarian nature of leadership in the body of Christ. No matter who the pastor or teacher is, we “are all brothers (and sisters)” in Christ Jesus.

Do you see ministers obsessed with honorary titles, like “Pastor,” “Reverend,” “Apostle,” “Doctor,” “Master Prophet” and so on? (Please notice I said obsessed). It’s not a good sign in light of what Jesus taught. This was the way religious leaders were during Christ’s earthly ministry and you’ll unfortunately see the same thing today. Of course, hard-working servant-leaders are to be respected (1 Thessalonians 5:12) and Ephesians 4:11 shows that there are legitimate leadership gifts in the body of Christ—apostles, prophets, evangelists, pastors and teachers—but these are gifts, anointings or positions, not titles.

If you disagree, try to find one occurrence in the New Testament where a leader is addressed as Pastor So-and-So, Apostle So-and-So, Teacher So-and-So or Reverend So-and-So. You won’t find it because it’s an unbiblical practice. Paul was simply called “Paul” and other significant leaders were also referred to by name, like Peter, John, James, Apollos, Timothy and Barnabas (e.g. 2 Peter 3:15 & Galatians 2:6-9). The Holy Spirit inspired these passages through men of God (2 Peter 1:20-21) and the Bible is the blueprint for authentic Christianity. In other words, this is the example God’s Word sets for believers throughout the Church Age. If these great men of God could be referred to simply by their first names how much more so men and women of God today, great or small?

Let me stress that I’m not saying every leader in the body of Christ who utilizes a title is a wicked counterfeit frothing at the mouth with arrogance. I’m just saying that titles for servant-leaders were not used in the 1st century as recorded in the New Testament Scriptures and therefore those who are obsessed with titles have a problem because there’s no biblical basis for the practice, except that the Pharisees and teachers of the law relished honorary titles. What godly man or woman wants to be associated with such religious cons?

Jesus said that the greatest amongst us—meaning leaders—should have servant’s hearts and not be pompous authoritarians who revel in the power and honor of their position (Matthew 23:11). Paul taught the same thing (2 Corinthians 4:5 & 1 Corinthians 4:1). Let me hastily add, however, that having a humble servant’s heart and an equalitarian attitude doesn’t mean being a wimpy, powerless milksop. Anyone close to the Almighty will be anything but because God is the awesome Fountain of Life who gushes life and power into the hearts of anyone who gets close to Him (Psalm 36:9), which is why we see dynamic men and women of God throughout the Old and New Testaments doing all kinds of bold and amazing things with God’s blessing and empowerment.

Furthermore, Godly men and women aren’t nicey-wicey doormats (speaking as someone who highly values niceness). Sometimes walking in love calls for tough love and sometimes the kindest thing you can do for a person is to boldly tell him/her the awful truth. Jesus did this when he powerfully cleansed the temple of greedy charlatans and carnal riff-raff whereupon he instilled fear in the religious leaders and amazement in the onlookers (Mark 11:15-18); Paul did it when he radically rebuked Elymas the sorcerer for trying to keep the proconsul of Cyprus from the faith (Acts 13:8-12); and Peter did it with another sorcerer in Samaria (Acts 8:9-24).

Simply put, insisting on a title (not a job position, a title) smacks of insecurity. The problem with this is that strong men and women of God are not insecure. They’re genuinely close to the LORD and therefore are perfectly secure with who they are, whom they serve, and what their God-given mission is.

Beyond pride and insecurity, the reason some fivefold ministers — mostly pastors —insist on a title is to subconsciously drill into their congregants (and others) that they’re the authority of the assembly in question. While this seems legitimate and harmless on the surface there’s an obvious drawback: It unconsciously promotes the sheeple mentality wherein believers are perpetually dependent upon their pastors. In short, it promotes spiritual immaturity in the long run.*

* See this article for details.

If you are a fivefold minister, here’s a test to see if you have a problem with the “title syndrome”: If you’re even a little disappointed or, worse, offended when someone fails to address you with a title like “Pastor John” or “Reverend” you have a problem and need to change for the positive, i.e. REPENT.

Legalism — Understanding its Many Forms

Key of Knowledge — What is It?